In this post, we will discuss what rollups are, how they currently work on Ethereum and how they will work on Celestia.

However in Celestia, we envision a new type of rollup: sovereign rollup chains. These are independent, sovereign chains in their own right where the correct rollup chain is defined by the rollup sub-network itself, similar to an independent L1, and may optionally have trusted or trust-minimized bridges with other chains or settlement layers.

Typical rollups are maintained by three main parties: sequencers, rollup full nodes, rollup light clients. All rollups have a state, which may for example be all the account addresses and token balances of the users of a rollup at a point in time.

Sequencers are nodes which receive new rollup transactions from users, combine the transactions into a block, and post that block to the consensus and data availability layer. A block consists of two components: a block header, and the actual transaction data. The block header contains, amongst other things, a cryptographic commitment to the state of the chain—usually a Merkle root.

Rollup light clients only download the rollup block headers, and do not download and process any transaction data, and thus cannot compute the latest state or verify the state validity of the rollup themselves. They can instead learn about the latest state commitment from the latest rollup block header, and ask rollup full nodes for parts of the state. They also check the validity of the rollup transactions indirectly, using techniques such as fraud proofs or validity proofs.

For a more detailed and technical explanation of rollups, we refer the reader to this Celestia forum article on rollups.

Current rollups on Ethereum post their blocks directly to an EVM-based smart contract, also known as a bridge contract. This contract effectively implements an on-chain light client for the rollup, that receives block headers and processes fraud or validity proofs. In this model, there is an enshrined, hard coded, trust-minimized bridge to the Ethereum main chain.

Using the bridge contract, users can deposit and withdraw assets between the rollup and the execution chain that the bridge contract lives on in a trust-minimized way, because the contract will not accept invalid blocks from sequencers, thanks to fraud or validity proofs.

The Ethereum chain, acting as a consensus and data availability layer, only records and finalizes blocks that are valid according to the bridge contract. Thus the rollup full nodes and lights clients (outside of the smart contract) consider the Ethereum on-chain light client as the root source of truth as to what the canonical (correct) rollup chain is. In this model, we consider that Ethereum is enshrined as a coupled settlement layer for the rollup, where the rollup is a 'baby chain' to Ethereum rather than an independent chain in its own right.

Sovereign rollups on Celestia do not post their blocks to a smart contract, but directly onto the chain as raw data. The Celestia consensus and data availability layer does not interpret or perform any computation on the rollup blocks, nor run an on-chain light client for the rollup.

Instead, the rollup effectively operates like a layer 1 blockchain: full nodes and light clients download the blocks of the rollup directly from the rollup's own peer-to-peer network. The main difference is that they also verify that the rollup block data was included and ordered on the Celestia data availability layer via a Merkle proof. Therefore, similar to a layer 1 blockchain, the canonical chain is determined by nodes that locally verify the fork-choice rule and the transactions of the rollup, rather than an enshrined on-chain light client.

Fraud and validity proofs also work similarly to how they would work in a layer 1 blockchain. Fraud proofs are gossiped to clients directly via the peer-to-peer network, and validity proofs are simply included with the block header (for example, see Mina Protocol). Because the network synchrony delay in a peer-to-peer network is likely to be significantly smaller than the delay of getting a fraud proof included on-chain, this means that the challenge period for peer-to-peer fraud proofs can likely be much lower, leading to faster finality for light clients.

In this model, there is no enshrined bridge between the rollup and any settlement layer, because the rollup blocks are simply posted to a data availability layer directly, rather than a smart contract. This is aligned to the Cosmos design philosophy, where a bridge to the Cosmos Hub is not enshrined to Cosmos zones, but is optional and can be added while still allowing zones to retain their sovereignty. Rollups may still bridge to other rollups in a trust-minimized way—we will discuss this in the next section.

To “not enshrine a settlement layer” is primarily a social distinction rather than a technical one, which means that there is a social contract between the rollup’s community that the rollup’s transaction validity rules are defined by the community rather than an immutable L1 contract. In practice, this means that bridges to the rollup, which are not enshrined, must be mutable so that there is an upgrade path which acknowledges hard forks on the sovereign rollup (discussed in the next section).

Consequently, this means that the community of a rollup can upgrade the chain with a hard fork, without needing to hard fork the settlement layer or the data availability layer or embedding on-chain governance that defeats the trust-minimized nature of the chain. This is particularly relevant if there are assets that are minted natively on the sovereign rollup chain, rather than all of the assets being bridged from other chains.

Let us assume that some sovereign rollup chain A wants to bridge with another chain B—which we will assume is also a rollup.

A bridging contract would exist on both chains, that would allow assets to be withdrawn and deposited to either chain (e.g. via a lock and mint mechanism), and monitored (either directly or indirectly via a relayer) by each chain's sequencers or validators to execute the transfers.

Currently, rollups are expected to bridge to a single settlement layer that acts as a settlement hub, such as Ethereum (hub-and-spoke bridging). If rollup chains A and B are both connected to the same hub, then they can bridge assets to each other using the hub as an intermediary for settlement.

However, just like IBC, rollups could also choose to bridge directly to each other instead of using an intermediary hub chain (point-to-point bridging).

Let us assume that the state machine of an optimistic rollup chain A is written directly in Golang (e.g. using the Cosmos SDK), rather than a smart contract environment such as EVM or CosmWasm. In order to bridge with chain B, chain B will need to upgrade their node software in order to include the state machine of chain A as a library, in order to validate the fraud proofs of chain A. This is because chain B cannot automatically add chain A's state machine code because it might be malicious or non-deterministic, thus posing a security risk. Therefore social consensus or governance is needed to add such a bridge. This would also be similarly needed in the case of a validity rollup that uses a ZK proof construction not understood by chain B. We refer to this as static bridging, because bridges must be explicitly added by chain upgrades. Such a bridge could be implemented as an IBC light client.

On the other hand, if an optimistic rollup chain A is written in a sandboxed smart contract environment such as EVM or CosmWasm, then chain B could allow the state machine code of chain A to be added directly into chain B's state machine, without any need for social consensus or governance, for example using a smart contract. Likewise, if chain A was a ZK rollup, it could be bridged dynamically to chain B, as long as chain B is capable of understanding chain A's ZK proofs. We refer to this as dynamic bridging.

However, committee-based bridges also exist (such as IBC bridges today), where instead of relying on proofs for state validity, the bridge relies on a committee to attest to the validity of blocks. Such a bridge is not trust-minimized, as the committee can steal funds. However, such bridges may have lower complexity as the destination chain does not need to have functionality to process fraud or ZK proofs of the source chain.

The eventual goal of current Ethereum rollups is that the rollups should not be upgradeable by a multisig or a committee, because if they can they are not trust-minimized as funds can be stolen via an upgrade. In this model, rollups can only be upgraded by hard forking the L1 because the canonical chain is defined by the L1's settlement layer, meaning the rollups have no sovereignty.

However for sovereign rollups to be practical, there ought to be an upgrade path which acknowledges that the rollups are sovereign rather than enshrined to a settlement layer. There are several approaches that can be considered, which impact if the bridge is trust-minimized or not. Consider a rollup chain A is hard forking, and chain B needs to upgrade its light client for chain A:

At their core, rollups are simply blockchains, and rollup bridges are simply light clients for those blockchains. The current status quo for rollups popularized by Ethereum aims for non-upgradeable rollups with an enshrined settlement layer. This is equivalent to running a client for a blockchain that can never be upgraded, whose blocks are only valid if accepted by one enshrined on-chain instance of a light client for the rollup. As we have shown above, this is only a small subset of the design space for rollups.

At Celestia Labs, we're interested in sovereign rollups without an enshrined settlement layer, because we believe that the most important layer in blockchains is social consensus. In particular, blockchains are a tool to allow communities to socially coordinate in a sovereign way, without being burdened by the status quo. This means treating hard forks as a feature, not a bug, as hard forks give sovereign communities the ability to enforce social consensus. This is especially important as a social recourse mechanism when things go wrong, such as when Ethereum forked after the DAO hack.

Sovereign rollups will be a powerful way for sovereign communities to have community computers to track and enforce socio-economic value and agreements, without the overhead of having to bootstrap or maintain their own consensus layers and validator sets, and without being subordinate to the social consensus of an enshrined settlement layer which they may or may not align with.

Sovereign rollups also give developers more flexibility over their execution environment, as they are not bound to the limitations of an enshrined settlement layer that must process fraud or ZK proofs for their rollups, as in many cases there are fraud or ZK proofs that certain settlement layers may not be able to process trivially or efficiently.

Keep an eye out for a future post where we will go into more depth in laying out the case for why sovereignty matters in blockchains.

A program designed to empower modular builders with the right resources to build the future of scalable and sovereign blockchain networks. 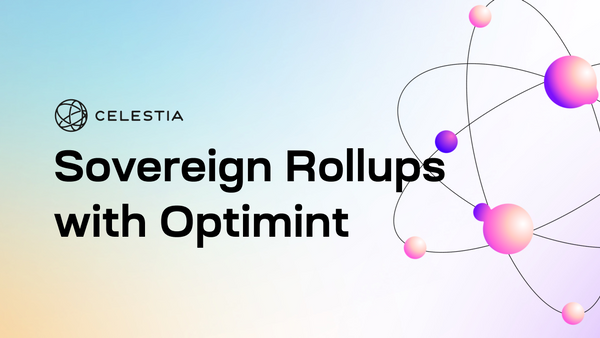 It’s been a short while since we deployed Mamaki, the Celestia testnet. With a successful launch, we rolled out our alpha data availability API and introduced data availability sampling - a key ingredient in Celestia’s scalable architecture. In the meantime, we introduced sovereign rollups to the world - 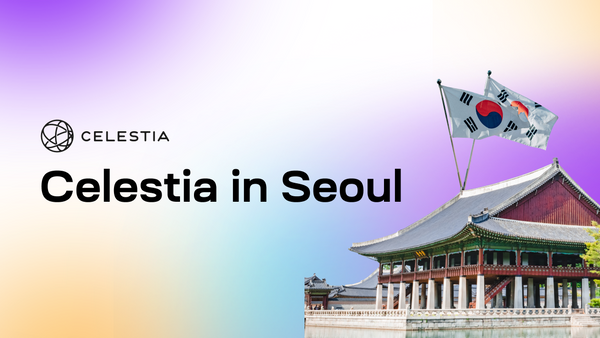 Greetings, Seoul! We are very excited about the Celestia Labs team’s attendance in Seoul for HackAtom, BuidlAsia and Korea Blockchain Week. With back-to-back events spanning over two weeks, this will provide an amazing opportunity to connect with the team to chat about building modular.   First up, our CEO Mustafa